Why PowerPoint Must Die in the Modern Enterprise 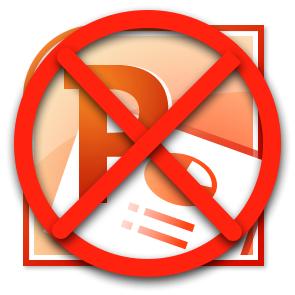 I'll admit, I've been wanting to write this article for years now. I've been really wanting to write it for a few months now, but today, I think I have the right words to do so. Let's just get it out in the open: PowerPoint is a scourge on the modern enterprise, and it needs to die. If we could vaccinate against its use, I'd throw my full support behind it. If we could take PowerPoint out with a tactical nuke, I'd give the order. I don't have the proper (read: nice) words to tactfully articulate my hatred for PowerPoint, but I think Phil Libin of Evernote did a great job. “It just dumbs everything down,” he said. “The cognitive style of it is wrong. It’s corrupt.”

Nearly every PowerPoint presentation I've seen in the last decade has been a colossal failure and a nightmare to endure. Nearly every person delivering said presentations has only been marginally knowledgeable about the topic at hand, often relying on random fluff and tacky clipart to utterly distract and confuse their audience. I have never known a tool to foster such incompetence and uselessness in the enterprise as PowerPoint, and I don't think I ever will. It has come to the point that if I see someone open a PowerPoint presentation in a meeting, I immediately start to question their capacity to lead.

All that being said, PowerPoint is nothing more than a tool (a bad one), and each tool has a purpose. In this case, the purpose is to illustrate an idea or story to a group of people. Human beings are visual creatures, and the best way to capture the attention of your audience is to complement your words with visuals. Aside from misuse of the tool, what else can be done to remedy the scourge of 'death by PowerPoint'? I think the first thing to consider is a change of tools.

While PowerPoint was the only game in town for a long time, there are much better alternatives today. Apple's Keynote (available on Mac OS X, iOS and iCloud online) and online SaaS app Prezi are two that come to mind immediately. If you want something more minimalist, Google Presentation fits the bill nicely. I still use all of Google's business apps on a daily basis. More recently, though, I've been toying with the presentation feature in my favorite app - Evernote. Evernote Presentation Mode is an excellent way to present information, in a logical way, from an app that organizes literally everything in your life. While I would love to be an Evernote Ambassador, please note that I do not receive any kind of pay from Evernote, and I have a full paid subscription that I gladly pay every year. I especially like Phil Libin's take on how he wants Evernote to replace Microsoft Office. He acknowledges that Excel is the one decent piece of software in the suite, but that most people use it to organize lists or do simple manipulation of data. I can attest to this. Aside from a select few who use Excel for very complex numerical data manipulation, most Office users would be better off using a tool like Evernote as their single collaborative workspace - for everything.

At the end of the day, I'd like to see the enterprise adopt better tools than PowerPoint for presentations. I really hope tools like Prezi and Evernote take over the enterprise space, but again, these are just tools. Learning how to properly craft and deliver a presentation are vitally important. For more information on that topic, see: 5 Rules for More Effective Presentations. Use these rules, no matter what tool you choose to use.
Email ThisBlogThis!Share to TwitterShare to FacebookShare to Pinterest